HOMEFOCUS ON THE RESULT (ACTIVATION) 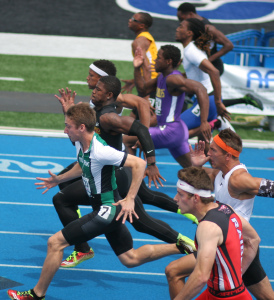 FOCUS ON THE RESULT (ACTIVATION) 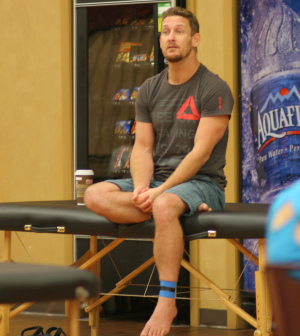 On July 18th & 19th Douglas Heel instructed, challenged, motivated, entertained, and activated 30 people.  This was Doug’s first U.S. appearance since February.  Douglas Heel seemed full of energy, focus, and enthusiasm despite the fact that he had spent June teaching in Jakarta and Taipei.

In June, Christopher Glaeser of Freelap asked me to come up with questions for Douglas Heel which would become the material for a future Freelap article.  However, Douglas is not a writer, he’s a teacher.  My questions were left unanswered as Doug navigated his way through Indonesia and surfed the magical waves off the coast of Bali.  Instead of writing answers to my 20 questions, Doug has agreed to be interviewed later this week.  I’ve never conducted an interview and Douglas may not be the easiest place to start.

I am currently reading “No Direction Home”, the story of the young Bob Dylan back in the sixties.  I see similarities between Douglas Heel and Robert Zimmermen.  Dylan was an enigma.  Reporters trying to interview Dylan began to call it the “anti-interview”.  Dylan never gave the same performance twice.  No one understood where Bob Dylan got his insights.  Bob Dylan was a young genius and a counter-culture icon.  So is Douglas Heel.  I’m a big fan of both.

For the fourth time in nine months I participated in a two-day “Be-Activated Seminar”.  This was my third Level-One.  You would think I would be bored with the repetition.  The opposite was true.  Great entertainers never give their fans the same show twice.  I had my best “Be-Activated” experience.

Track & Field coaches made up over 50% of the audience. Chris Herriot of Wisconsin-powerhouse Arrowhead H.S. was my partner. Mike Donato of Riverside Brookfield was the only head football coach in attendance. Dustin Hausherr of Downers Grove South (football & track) attended his third seminar. Steve Wiesbrook of Naperville Central is now a believer. Coach Tyrone Edge of Toronto, Canada, made the long trip to Chicago. The assistant strength coach from the University of Minnesota, Matt Van Dyke, was in attendance. The rest of the eclectic crowd consisted of medical doctors, chiropractors, personal trainers, and Pilates instructors. One engineer was in attendance. One of the top sprinters in Illinois, Alex Teague, sat in the front row.

Alex Teague of York (green/white) was in the lead at this point in the IHSA 100m finals. Teague ran a 10.52 in the state prelims. Alex will be taking Activation with him to the University of Wisconsin. 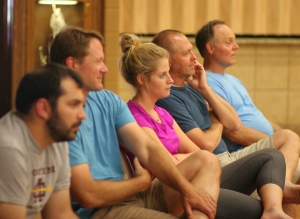 Nazareth won a football state championship last year with a total commitment to Activation.  The injury stats are documented in my article, 3 Reasons Why Activation is a Game Changer.  Anyone who speaks against Activation is defending the status quo at the expense of kids.  Downers Grove South’s football program is making the commitment this year.  Football teams at Shepard, Montini, Hinsdale Central, and Riverside-Brookfield are getting on board.

The track program at Indiana Tech has purchased activation sticks from Dr. Nelson.  The number of high school track programs who are getting into “Be-Activated” are too numerous to name.  We will soon see the day when the majority of IHSA state qualifiers will be activated athletes.  My best estimate of the number of activated athletes competing at this year’s state finals would be around 100.  Maybe “Be-Activated” is playing a role in The Golden Era of Illinois Track & Field.

I will not focus this article on the nuts and bolts of “Be-Activated”.  I’ve done that before.  If you want to read about my journey, you can spend an hour reading my previous activation articles.  I warn you, like all journeys, I started knowing nothing.

In my clinic presentations I quote Steve Jobs.  When asked what went wrong at Apple back in the 1990’s , Jobs said, “people started to get confused that the process is the content.”

Douglas Heel has his own version of the same idea.

Too many people get caught up in the mechanism, not the result. – Douglas Heel

One doctor in attendance said he was taught, “if it’s not documented in scientific research, you can’t do it”.

Stop worrying about being right.  As soon as you think you are right, you stop learning. – Douglas Heel 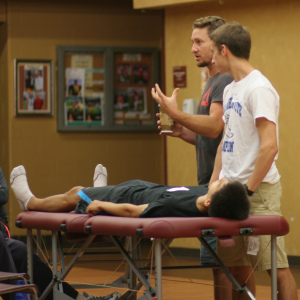 Those wishing to implement activation will eventually teach their athletes self-activation.  Athletes will be empowered, not dependent.

Stress is not a state of performance, stress is a state of survival. – Douglas Heel

Any coach worth his salt understands the mental aspect of performance.  “Baseball is ninety percent mental and the other half is physical.” – Yogi Bera.  Even dumb coaches know that Yogi was right.

I have techniques, not answers. My journey is just beginning. – Douglas Heel

Think Doug will be an easy interview? Ha. 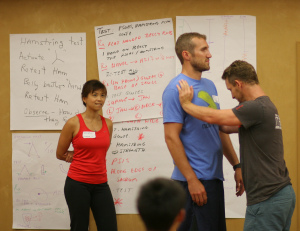 Douglas Heel working with A.J. Porter of Shepard High School (track & football). In the background is Kareen Lai of www.mumsinsync.com in Singapore.

About the time you think you are watching the David Copperfield of physios, Douglas Heel will remind you that breathing is the central focus of Activation. Breathing. Nothing controversial about breathing. Fact: the diaphragm exists in an exclusive relationship with the most under-rated muscle of the body, the psoas. The psoas is the body’s inner-most muscle and has more nerve endings than the hand. The job of the psoas is to lift the knee. The glute is the reciprocal muscle of the psoas. Breathing and movement. Ponder that one. Breathing and movement. The human experience … breathing and movement. By the way, the three points of zone-one activation are the diaphragm, psoas, and glutes. Fundamental stuff. 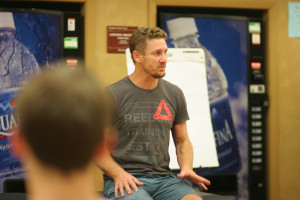 When Douglas Heel teaches, everyone in the room maintains eye contact.

Ironically, most people have a deactivated psoas.  Douglas Heel has worked with many professional athletes.  Most of them are not 1-2-3 patterns (psoas-driven).  Professional athletes are very good at developing cheat patterns.  Cheat patterns get the job done in other ways.  However, when the hamstring and quads are doing the job of the psoas and the glutes, injuries occur.  In addition, performance will never feel easy if movement is not initiated by the psoas.

I coach sprinters to “work easy”.  Old-school coaches want their athletes to “work hard”.  Have you ever noticed the fastest people in the world make sprinting look easy?  How about Tom Brady in football?  How about Stephen Curry in basketball?  Great athletes are smooth and effortless.  Activation makes hard work feel easy.

After getting activated, athletes are always told to get off the table and walk.  They are allowed to feel the change.  The athlete is then asked “How do you feel”.  I’ve now heard hundreds of answers from hundreds of athletes.  In my experience, these are the most common answers: 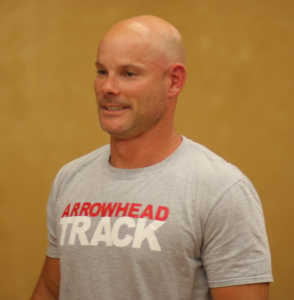 Chris Herriot, head track coach at Arrowhead H.S., shows the parasympathetic state after an uncomfortable session with Douglas Heel. The pain during activation can be intense.